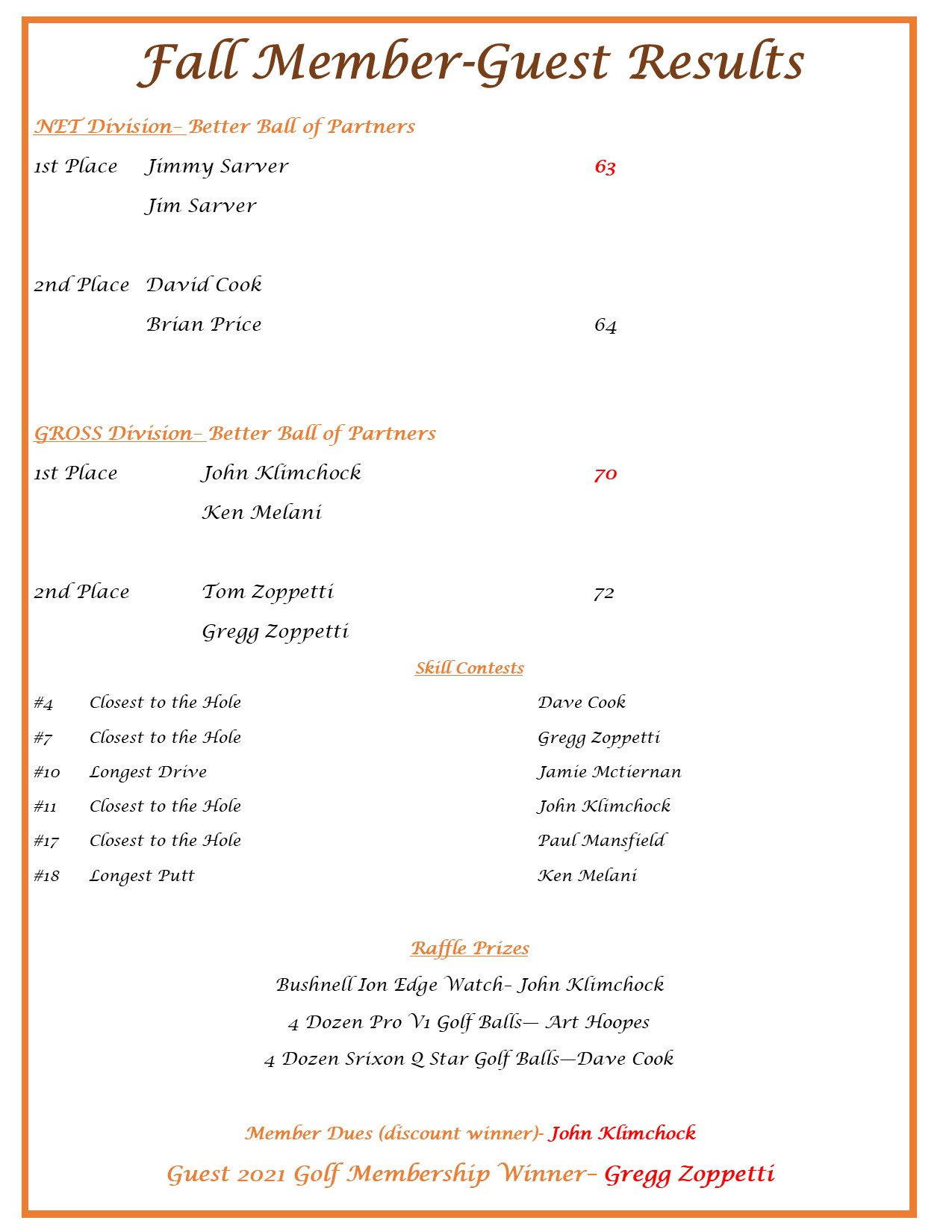 Fall has arrived and soon we will start to see foliage all throughout the Laurel Highlands. In my opinion, this is one of the best times to Golf. The weather is cool, the scenery is spectacular, and the Golf Course is in outstanding shape. We hope to see you out on the course and enjoy these last few weeks before snow arrives!

Though Fall has arrived, we keep the tournament season going, with three more fun events for you to participate in. We still have our Bucks & Does Mystery Night, Fall Member-Guest and our Pumpkin Par-3 event. See below to read all the details, ways to sign-up for these great events and information regarding the Driving Range and GHIN Score Posting.

Even though Fall has arrived, I am already counting down the days to the shopping season. Unfortunately getting product, availability and special orders may be hard to get these days. So, this may be the year to shop early and any special orders you may want, please reach out and we will do our best to fulfill your requests. Also, check below in the Golf Shop section to see special order gifts that may fit your perfect someone.

August closed out with a Member-Member tournament.  Two-person teams were chosen by the Pro Shop.  Play was a modified Solheim Cup with one best ball on holes 1-6, alternate shot on holes 7-12, and a scramble on holes 13-18.  Barbara Sloan and Pat Warren won, with Linda Boyle and JoAn Treskovich placing second.

There was no golf on September 7 due to course aeration.  No gadget was scheduled for September 14, but the 18-holers agreed that they would like to have one.  Playing in threesomes, the game was best two balls of the three.

Three clubs and one putter was the game on September 21.  Becky DeMuth won with a net of 72. Enis Cassil placed second with a net 75. The 9-holers played, with the rare opportunity to play the back nine, chose to throw out the two worst scores.  Dottie Lynch and Ann Aungier tied with a net 23.

Closing day is October 5.  The scramble will start at 10:00 a.m., followed by lunch, awards, and election of officers.  Please sigh up in the Pro Shop by Saturday, October 2, so Sean Knaus can make up the teams.

It’s hard to believe summer is almost over and bales of hay and pumpkins will soon be out in front of the Golf Shop. If we follow down the same road as last year, we will still have two wonderful months left to golf.

Time has come though, and golf will start to slow down in September, but we still have fun events planned. Our 5 Person Scramble will be a shoot-out amongst our almost sold-out crowd, we’ll test a team’s course management with our Cross-Country Event, see how much you love your spouse in our Couples Date Night and invite the ladies to take part in our Wedges & Wine clinic.

Oh! And don’t forget to root us (Sean & Jesse) on for our Folds of Honor Marathon where we hope to get 100 holes this year! We have also added a raffle this year with great prizes (see below).

August started with the International Format. Teams were chosen by the Pro Shop. Two best net balls on 4’s, 5’s and one best net ball on 3’s. Winning team was Cindy Soccio, JoAn Treskovich, Becky Demuth and Sherry O’Halloran. The 9-holers did not have a quorum for a gadget.

August 10 was slated for no play, but the scheduled outside event was cancelled. Beat the Pro, originally scheduled for May 11, was rained out. Unfortunately, the game suffered the same fate as only four holes were played when the thunderstorms rolled in. Perhaps next year will have a better result.

Friends Day, hosted by Betty Rosa and Karen Thompson, saw a strong turnout. Thanks to Bill Elliott for expanding the event so members were allowed to bring up to three guests. He and his staff are commended for providing a wonderful lunch under difficult conditions. Thanks to Betty and Karen for the delicious table favors.

The Ladies’ Classic was played on August 24. Thanks to Enis Cassill for organizing the event and for treating us to an ice cream dessert. Results as follows:

Closest to the hole #4    Linda Boyle

Closest to the hole #7    Barbara Sloan

Closest to the hole #11 Linda Boyle

Closest to the hole #17 Carolyn Morford

Dottie Lynch won both 9-hole prizes with a low net of 40 and low putts of 17.

A new event, Member-Member, will be played on August 31, with two person teams chosen by the Pro Shop. Results will be reported in the September newsletter.

Gadget play in September will be curtailed for September 7 and 14 due to course aeration. We will start again on September 21 with another new game: Three Clubs & One Putter.